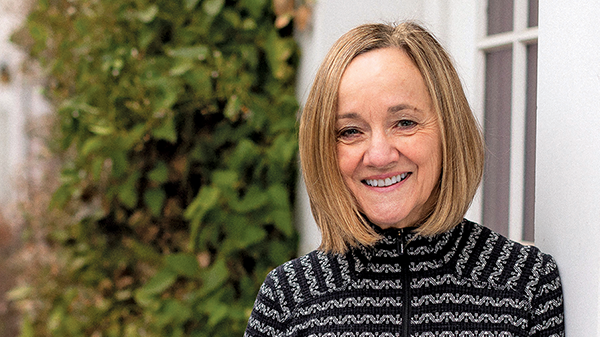 By her own admission, Dr. Haas was not a good writer. Yet she became the editor of Choragos, the student newspaper.

She was a poor science student — and a few years after earning her bachelor’s degree in psychology she went to Harvard Medical School.

Not long after she finished her residency, Dr. Haas was tapped for a leadership position, the first of several.

In retirement, Dr. Haas happened to be at a lecture by a well-known author and physician, who mentioned a new project he was recruiting for. She emailed him, saying, “You don’t have any idea who I am but I’m the one you want to hire.” She got the job.

“Women’s education matters,” Dr. Haas says. “I would never have grown the way I did at a coed school. I would not have been in a place where the only people who raised their hands in class were women, where half the faculty were women. Where I became the editor of the newspaper. It’s just the immersion over four years swimming in that environment. It was a critical formative experience.”

Dr. Haas came to Mount Holyoke from Akron, Ohio, having been taught in high school to memorize and not think critically, and her world was up-ended in her freshman history class. They were discussing a book that included a mention of cattle that had been herded from Oklahoma to Virginia to be shipped to Europe.

“The book said that these cattle were just highly valued for their meat,” she said. “And the professor said, ‘How do you think the muscles would be on cows that had just walked 1,000 miles. Do you really believe that?’ It was such an eye-opener for me that people wrote stuff that wasn’t true, or that wasn’t thought out. That’s the kind of intellectual awakenings that I got from Mount Holyoke.”

Because of her experience at Choragos, her first job after graduation was in a management training program at Time Inc. Then one night her world was upended again when she attended a movie about the murders of Black Panthers Fred Hampton and Mark Clark. It included scenes from a pediatric clinic that the Panthers were running on the South Side of Chicago.

“I was quite moved by this movie,” Dr. Haas says. “And so, standing on the corner of Broadway and 23rd waiting for the crosstown bus, I said, I’m going to medical school.”

From the start, she was interested in general obstetrics and general gynecology, and also specialized in fertility. She developed an interest in what is now called evidence-based medicine. Whether seeing patients or as an administrator — as chief of obstetrics for Atrius Health, she oversaw a group of physicians, nurse practitioners and midwives practicing in 15 offices and nine hospitals — much of her career has focused on quality of care and patient safety. Those leadership abilities, along with her commitment and curiosity, all built on experiences that began to emerge during her undergraduate years.

“You start to be able to think more critically and stop just accepting what people told you,” Dr. Haas says. “I didn’t get there for quite a long time. But that critical thinking about cows walking a thousand miles was really important to me. Mount Holyoke definitely laid that foundation.”

Dr. Haas also thought critically about how her charitable giving could help to bring about change. “What I wanted was security that what I cared about — somehow redressing centuries of racial injustice — was going to happen,” she says. “I didn’t want to leave it till the end of my life when circumstances could change and there wouldn’t be money.”

Dr. Haas decided to establish a charitable remainder unitrust with Mount Holyoke. The trust will pay her a percentage of its value each year during her lifetime, then the remaining funds will support scholarships for students of color.

Mount Holyoke’s gift planning staff helped identify options so Dr. Haas could meet her goals. “I didn’t know about the vehicle, and the gift officer was very patient with my timeline and allowed me to articulate what I wanted this money to go,” she says. “Mount Holyoke heard me, heard what I wanted, and heard how much I wanted to ensure that it would endure.”