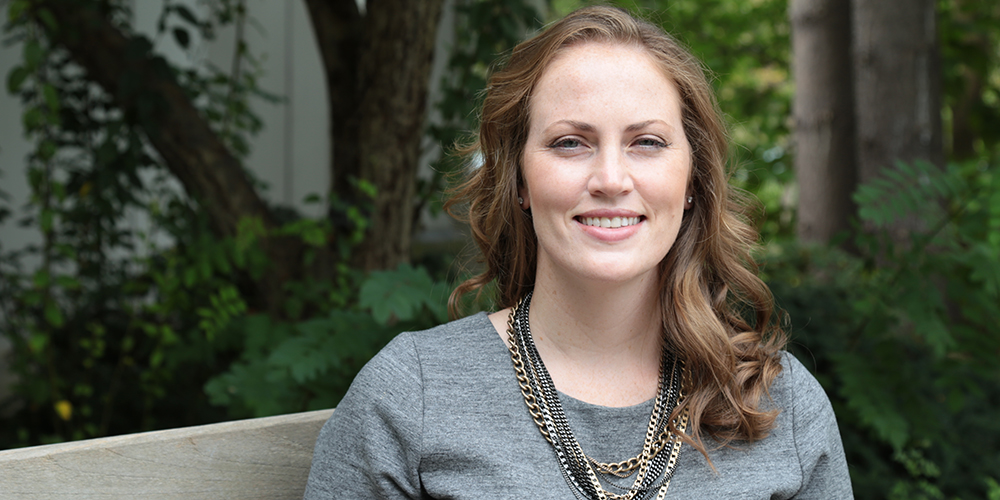 Norma Barrett ’04 is determined to help Mount Holyoke continue to open doors for women who are defying the odds. That’s one reason why she has named the College a beneficiary in her will.

“Making a bequest is incredibly easy,” she says. “It’s never too early to decide to support Mount Holyoke beyond your lifetime.”

Known by her middle name of Jean while on campus, Norma grew up in southeastern Ohio; she lived in a coal-mining region near the West Virginia border. Her parents both had graduate degrees but couldn’t hold down jobs. The result was what Norma describes as a chaotic, cash-strapped childhood. Around age 13, she began collecting college catalogs and arranging them alphabetically in cardboard boxes. “I knew college was my way out of an unstable home and into a better future,” she says.

With a FAFSA reporting a family income below poverty level, Norma received a full award of scholarships and grants, and arrived at Mount Holyoke in fall 2000. What she found, she says, were people with interests she never knew about or imagined while growing up in Appalachia. “My roommate’s hobbies included dressing up in Renaissance-style clothes and live-action role play. That was my introduction to the wonderful, diverse group of Mount Holyoke students. I loved it.”

Along with taking classes and playing softball, Norma held two campus jobs. What only her closest friends knew was that she also worked 20 hours a week at The Gap at the Holyoke Mall. The earnings went for books, clothes, softball gear, and the team’s annual spring training trip. She also regularly sent money home to help her family.

“My family’s situation weighed heavily on me,” she says. “I felt guilty that I was in such a marvelous place. My packed schedule of classes, softball, studying, and working was just pure joy.” Norma admits that working so much resulted in earning average grades. What she excelled in was time management and, along the way, MHC instilled in her a belief that she could achieve whatever she set out to do.

“It was such a supportive community. I regret now that I spent so much of those years trying to hide my story. I felt like an impostor and didn’t want to be found out,” she says.

After graduating, Norma returned home, where she lived with her family in a motel room. She was seeking work in finance in Pittsburgh but the job market there was tough. One day she looked up from scrubbing bathrooms as a chambermaid at a West Virginia golf resort and thought, “What am I doing?” With encouragement from two Mount Holyoke friends, she moved to Boston and took up residence in their apartment. A job at Brown Brothers Harriman soon followed, and two years later she met her future husband through another Mount Holyoke classmate.

Norma worked in finance for about eight years. But after the financial crash in 2008, she found herself reevaluating. “I had been a fundraising volunteer for Mount Holyoke since graduation and I liked that,” she says. “I would look forward to going home and making those calls to classmates. So, I thought, ‘Why don’t I look into that?’”

Norma credits the Mount Holyoke alumnae network with helping her retool and make connections. In 2012, she was hired at Harvard Business School. Now she works at Wellesley College as senior associate director of the Wellesley Fund. She’s also the mother of a six-year-old son and a three-year-old daughter.

It was her son’s birth that inspired Norma and her husband to make a will. Thanks to her work in development, she knew how easy it is to make a bequest. And making a bequest to support Mount Holyoke felt like the right plan for her. “I already give annually through The Mount Holyoke  Fund,” says Norma. “Each time, I think of the younger version of myself. I think of the many young women overcoming obstacles to be at Mount Holyoke College. I want to help them—now, and as part of my final plans.”