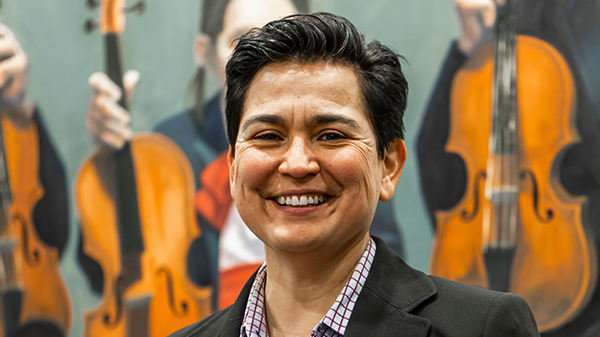 The story of the journey of Mary Ann Villarreal ’94 sounds like a movie.

Raised by her grandparents in a small religious rural town in South Texas, Villarreal went from earning a bachelor’s degree from Mount Holyoke — the first in her family to go to college — to getting her doctorate in history.

She wrote a book, moved into college administration, and in 2019, was named the University of Utah’s first vice president for equity, diversity and inclusion.

A troubled teenager, Villarreal first heard about Mount Holyoke when she was sent to a cousin’s in Springfield, Massachusetts. But she didn’t think going there could actually happen.

In January of her senior year in high school, she enlisted in the Air Force Reserve and found herself posted, coincidentally, to Westover Air Reserve Base in nearby Chicopee. That’s when she decided to apply. By the time she started at Mount Holyoke that fall, she had already completed basic training and technical school.

“I often wonder what the admissions committee saw that said that I could possibly be a part of the Mount Holyoke community,” Villarreal says. “Now I’ve sat on admissions committees and I know all those pieces. But it was hard. I was clearly underprepared. I was frightened and I was out of place.”

It didn’t help that she arrived in time for classes but missed Orientation. The community quickly came to her assistance.

“The thing about Mount Holyoke is that there were people who clearly saw that there was so much I didn’t know,” she says. “It’s like they would put their hands on my shoulders and say, ‘You want to go that way. And you want to talk to so-and-so when you get there. Tell them I sent you.’ And that’s the way I moved around Mount Holyoke.”

The network that has been a part of her life are the friendships she found in La Unidad, including Anne-Marie Rodriguez ’90, the Big Sister Villarreal was matched with by the student org — and Rodriguez is her executive coach today. She never imagined that she would be in a position enlist the services of a financial advisor, but knew to turn to Camille Gagliardi ’90 when the need became apparent.

Two professors in particular changed her life: Martha Ackmann, a senior lecturer in what became the gender studies department, and Jean Grossholtz, professor emeritus of politics.

When it came time to choose a major, Grossholtz helped her decide on women’s studies. When Villarreal was called up from the reserves to serve in Desert Storm, working 12-hour overnights, administrators assured her she could return to the classroom. When it came time to move back to campus, Villarreal couldn’t face the possibility, so Grossholtz gave her a room in her home.

As graduation approached, Villarreal told her advisors that she wanted to go to law school. “Jean said, ‘No, you don’t want to go to law school. What you want to do is get your Ph.D.’ And Martha said, ‘I know the best person for Mary Ann to work with. And I’m going to see her at a conference.’ Martha is the reason I worked with my graduate advisor,” says Villarreal, whose research is in oral history, U.S. history and Latinx and Mexican-American history. Currently her writing is focused on leadership.

Unsurprisingly, she has always felt the need to give back to Mount Holyoke. “Mount Holyoke taught me that I can make change. Whether I fit or not, they made room for me.”

In 2012 Villarreal began to plan her estate, keeping in mind her children. “While I didn’t have a lot, everybody said I needed to be prepared,” she says. “I knew that I couldn’t give to Mount Holyoke in big amounts. But I also knew that the endowment made it possible for me to go to Mount Holyoke. So in 2012 I added it to my estate planning and I would revisit it and add a little bit over time, as I advanced in my career and my children got a little bit older.”

She recently revised her plans to name Mount Holyoke as a beneficiary of her IRAs. The gift is now built in.

“I felt like I owed Mount Holyoke. It connected me to a world that gave me access to the impossible,” she says. “That’s why I volunteered with the College’s Admission — I wanted people to find that world too. I didn’t know that world was possible. It felt like Mount Holyoke had made itself ready for somebody like me.”