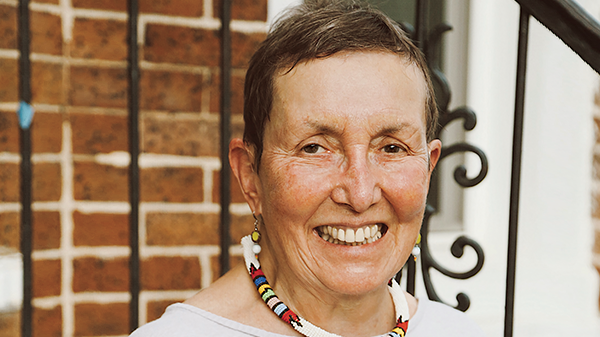 Mount Holyoke was pretty much preordained for Catherine Russell Hammond ’65. She’s one of seven in her family over three generations to attend the College. Besides that, she grew up hearing the famous family story about her mother’s first job after graduating.

As president of the student body, Jane Seaver ’41 was Eleanor Roosevelt’s campus escort when the first lady came to deliver the Commencement address.

In addition to her mother, Hammond’s other alumnae relatives include her aunt, Loraine Seaver Perdue, class of 1938; her grandmother, Grace Kelley Seaver, class of 1911; and great-aunts Florence Kelley, class of 1910, and Edith Seaver Allen, class of 1907. Hammond was followed by a cousin, Alison Dye ’69.

Mount Holyoke was a challenge for her, Hammond said. “It was something of a bootcamp. They worked us very hard. As one of my friends said, it was hard to get into Mount Holyoke but it was also hard to get out of it. I mostly learned smoking and playing bridge. One of the things that I value most about Mount Holyoke is that it educated me in spite of myself.”

Hammond majored in political science and studied with Victoria Schuck, the innovative professor who taught courses in American government, urban planning and public policy administration at the College for nearly 40 years.

“Her approach was field work, boots on the ground. I interviewed people in Holyoke. I did polling. It was the beginning of what Mount Holyoke now does,” Hammond said, referencing current programs such as the MHC Semester in D.C. and the Careers in Public Service program.

She joined the newly founded Peace Corps after graduation, teaching English-Asian history and economics to students in a remote part of Malaysia. Looking for work after returning to the United States was the first time she’d confronted overt sexism, Hammond said.

“They said, ‘We don’t hire women for that job.’ That was when I began to appreciate Mount Holyoke. There you are for four years, cocooned in South Hadley, and everything is directed at you and you’re female. I think that’s one of the reasons that so many of the people in the women’s movement came from women’s colleges. We were so shocked by the amount of sexism.”

Hammond was able to find a lifelong professional home in public administration. She started at the new Equal Employment Opportunity Commission — “I got to sit in the catbird seat and look at what sexism really looked like” — then went to the U.S. State Department. She married and her husband’s work as an academic physician took them and their two children to Hershey, Pennsylvania, where she earned a master’s degree in public administration.

“It became clear to me when I got my graduate degree that I was so much better educated than anybody else in my program,” she said. “I never got less than an A+. I can read, I can write, I can think and I can talk. And I don't think those things necessarily are true for a lot of people who’ve gone to college.”

Hammond spent the next 20 years working as a legislative assistant in the Pennsylvania State Senate, where she served as the highest ranking female staffer. She retired as executive director of the Pennsylvania League of Conservation Voters and moved to Baltimore, Maryland, where she remains politically active as a volunteer.

Hammond demonstrates her dedication to the College by both volunteering and extending financial support. A monthly donor since 2002, she now uses the tax benefits of IRA-giving for her gifts to The Mount Holyoke Fund — and for a legacy gift to the College that she recently planned.

“I just changed my beneficiaries in my IRA,” she said. “It makes a lot of sense and it was easy to do.”

Today, Hammond said, Mount Holyoke continues to draw her time because it’s a family tradition and because of the people.

“I’m involved because my best friend from college, Betsy Fish Guardenier, was president of our class for our 25th Reunion and she dragged me into doing something,” she said. “I have very good friendships. When I go back, I am with this fabulous group of women and we just pick up where we left off.”

Learn more about giving through your IRA.