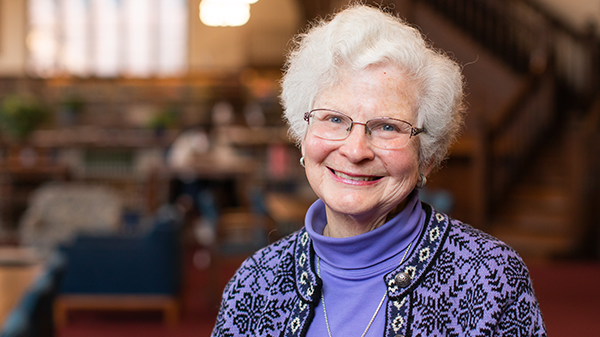 While attending a private high school in Houston, Texas, Ruth R. Barney ’68 was introduced to the Seven Sisters colleges at alum-hosted tea parties. Ultimately, she selected Mount Holyoke after visiting its “beautiful and welcoming campus.” She knew the education would be top-notch and transformative but says she never imagined the degree to which her time in South Hadley would be life-changing.

“I grew up in Houston during segregation. My family lived very comfortably and didn’t instill appreciation for the challenges that can limit a person’s opportunities and well-being. So I expected to return home after graduation, get married and raise a family in much the way my parents had done.”

A German major, Ruth credits her professors and classmates with opening her eyes, challenging her assumptions and changing her path. By senior year she still hoped to marry and devote time to raising a family, but her plans also included attending graduate school at Princeton University, teaching at the college level and living a lifestyle quite different from what she’d known.

In gratitude for that awakening, Ruth has faithfully donated to The Mount Holyoke Fund. She and her husband, Richard (Dick) Barney — whom she met at Princeton — also updated their estate plan to include a bequest to Mount Holyoke College once their two children were grown.

When Dick died suddenly in 2020, Ruth found herself revisiting her estate plan while revisioning her future. She contacted the College, interested in establishing a life income gift. As Ruth discussed her goals with Anne Vittoria, director of gift planning, Ruth shared that the College was also a beneficiary of her individual retirement account. Anne proposed combining the residuum from a charitable gift annuity with the proceeds of her IRA to create an endowed scholarship fund.

Ruth named the fund in memory of Sara Eleanor Barney, her mother-in-law. “She was one of the most intelligent, well-read, open-minded women I’ve known, but she never had the opportunity to attend college.”

After finishing high school, Sara, who was one of ten children, was expected to work to help the family pay for her brothers’ college educations since they were future breadwinners. Widowed at age 46, she returned to work to support herself and send her two youngest sons to college. Limited by her lack of education, Sara spent 20 years “tolerating the tedium” of taking shorthand, typing drafts of patent applications from her notes and retyping them after her bosses made edits.

“My mother-in-law enlightened and empowered me,” Ruth said. “During Sunday dinners —over London broil and Sara’s homemade pickle relish—I first saw a family having lively discussions with starkly differing political viewpoints, argued strongly, but always with respect. At her table, I began finding the voice I’d been afraid to use with my own family, even after Mount Holyoke had expanded my naïve, limited perspective.

“I have often wondered what Sara’s life would have been like if she’d had access to the enriching experience of college and a career of her choosing.”

Ruth’s own career began with teaching a first-year German class at the College of Saint Elizabeth in Morristown, New Jersey. Her willingness to assist international students with writing chemistry lab reports led to a part-time ESL tutoring position and then to a part-time ESL teaching position. She later earned a full-time faculty position at Caldwell College in New Jersey where she taught ESL classes for 20 years.

“Mount Holyoke and Sara Eleanor Barney were instrumental in launching me on a liberating journey,” said Ruth. “That’s what I want to share with a new generation.”