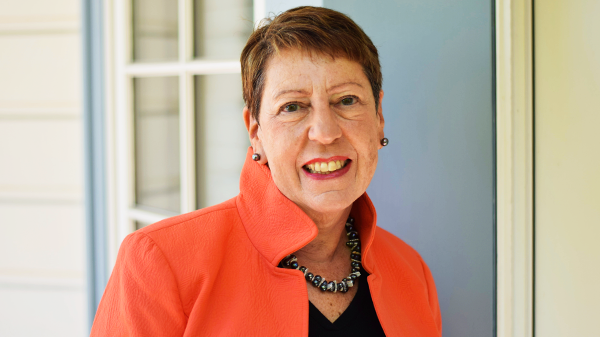 After graduation, Robin Morse Edwards ’69 began a tradition of giving that’s about to turn 50.

As a first-year student at the New York University School of Law, she says that her initial gift to The Mount Holyoke Fund was small, but she wanted to show her appreciation for an education she describes as empowering.

Five decades and more than 50 gifts later, to celebrate her 50th Reunion, Robin has named Mount Holyoke as the beneficiary of an irrevocable trust. Her support also includes an endowed fund that provides scholarships to current students.

“Mount Holyoke contributed to everything in my adult life: attending law school, a wonderful legal career, and friendships that have endured. I have always felt that I owe so much to my Mount Holyoke experience.”

Growing up in Albany, New York, at a time when the Ivy League schools admitted only men, Robin was determined to attend one of Seven Sisters. During a visit to Mount Holyoke, she says she fell in love with the campus and the people she met.

“I had visited many schools but everything just clicked at Mount Holyoke. I applied early decision and was fortunate to be accepted. The financial aid provided by Mount Holyoke made it possible for me to attend.”

Robin majored in political science with a focus in constitutional law and United States politics. Along the way, she took advantage of the opportunity to explore subjects in wide-ranging fields. “I studied religion, art history, physics — I remain so grateful for the chance to become a well-rounded person.”

Along with offering her an outstanding education, Mount Holyoke also prepared her to hold her own in a male-dominated profession.

After one year at NYU, Robin married and transferred to the University of California, Berkeley, when her husband accepted a teaching post at the Mare Island Naval Shipyard in Vallejo, California. She subsequently began her legal career at a firm in Oakland, California, where she was the first female attorney on staff. She then became the first female attorney to have a child — and then another child — and continue working. She was the first woman president of the Alameda County Bar Association.

“There were obstacles at every step of the way when I started. I always had to get over a higher bar than the men. I had to be better. Fortunately, Mount Holyoke had instilled a real sense of confidence.”

Robin, who specialized in mergers and acquisitions, later moved to Sonnenschein Nath & Rosenthal (now Dentons) — then a nearly 100-year-old Chicago-based firm — and established its corporate practice in San Francisco, becoming the first woman to serve on its management committee and an active mentor to other female attorneys.

Now retired from legal practice, she is a member of the class of 1969 50th Reunion Leadership Gift Committee and looks forward to celebrating with her classmates this spring.

“Mount Holyoke changes with the times while remaining true to the liberal arts,” says Robin. “Giving back any way you can — in whatever amount you can — makes this possible.”