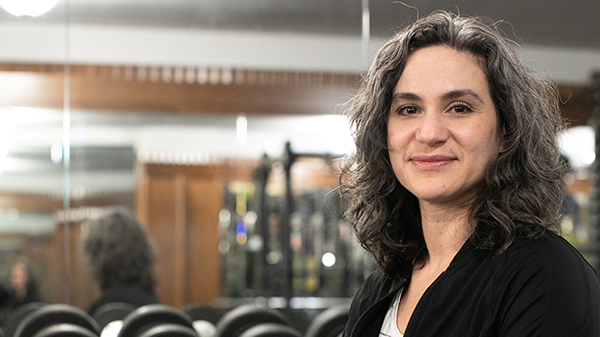 When she was applying to colleges, Laura Khoudari ’00 wasn’t thinking about Mount Holyoke, even though her mother, Amy Khoudari, was an alumna from the class of 1971. A chance visit changed her mind. Mount Holyoke provided an environment that supported her both academically and socially, Khoudari said, and that made all the difference.

“I became more comfortable being myself,” she said. “It felt safe to start to express myself, to connect with people. I came into my voice. And not only did I learn what I wanted to say, I felt OK saying it. That was the big difference for me.”

And Khoudari had lots to say. An American studies major with a concentration in American history, she loved her classes, including Mary Renda’s women’s history survey and Lynda Morgan’s African-American history.

She also made a core group of friends who became known as the Porch People because they hung out on the steps of Blanchard. “The College introduced the Adirondack chairs when I was there and I spent a lot of time with friends sampling them all,” she said. “We had long, meaningful conversations — and sometimes just silly ones. I think that’s part of why my connection with everybody is still so strong today. We were there for each other.”

After graduation, eager for an urban environment, Khoudari moved to Cambridge, Massachusetts. Because she’d loved her campus job in Archives and Special Collections, she set her sights on landing a position at a special library. She was hired as the curatorial assistant in the Department of Printing and Graphic Arts at Houghton Library, Harvard University’s rare book and manuscript library.

“I had no idea what a posh job that was until I left it for a series of much less fabulous jobs,” she said. “But I did realize that academia wasn’t necessarily for me.”

She moved to nonprofits, picking up a master’s in public administration along the way. Khoudari now works as a certified personal trainer in New York City. She has developed a practice she calls trauma-informed personal training, where she cultivates an atmosphere that helps support her clients with their work in psychotherapy. She’s also working on a master’s degree in counseling and mental health and writing a book, “Lifting Heavy Things,” on creating the conditions to heal in the gym.

“I want to give my clients a sense of agency,” she said. “I respect their boundaries simply by having very strong boundaries myself. I’m constantly using invitational language — I encourage them to check in and see what they want. I want them to start to understand what that is and give them the opportunity and the skills to say yes or no.”

Khoudari has teamed up with a nonprofit in order to offer sessions on a sliding scale basis. She’s also creating a program to train others — personal trainers, physical therapists, coaches — on how to have a trauma-sensitive approach to strength training.

“It’s just like what I learned at Mount Holyoke,” she said. “I’m required to bring myself and my voice to this work. I’m required, even if I’m uncomfortable, to be in that space. I’m required to be my authentic self. It’s really important to role model behavior for my clients.”

This is why, in essence, she donates to Mount Holyoke today, Khoudari said. The skills she’d developed and support she’d received as an undergraduate empowered her to follow the many professional opportunities presented to her. Perhaps best of all, she found a strong community of people who are still her closest friends.

“I have included a bequest to the College in my will,” Khoudari said. “And I have an automatic withdrawal every month to The Mount Holyoke Fund. I looked at my budget and I thought, OK, what is sustainable, what can I afford to contribute regularly? In the estate planning, I felt that I could leave some money to the College. I won’t need it then.”

Khoudari says she chose both philanthropic approaches carefully. “Both of them were made very specifically because I want to be able to give to the College. It’s a really special place. It really gave me so much. I learned so much. I really came into myself — and I want to protect it.”

Learn more about giving through your will.