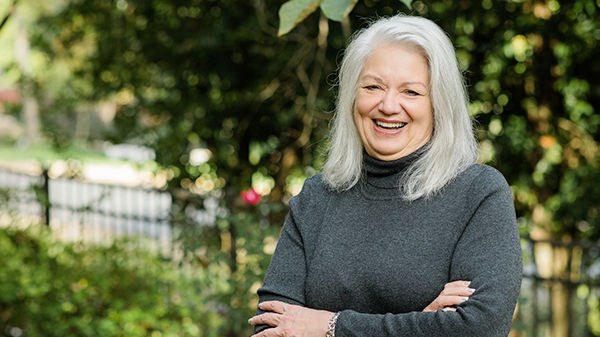 Ann Hewitt Worthington ’72 spent her first semester at Mount Holyoke wondering if it would be her last.

“I was adopted at birth, and there was a lot of emotional and financial uncertainty in my life,” she said. “Each semester I felt as though I was hanging by a thread. So I relate to students with difficult family situations.”

Ann, who majored in religion and later earned an MBA from Columbia University, went on to make a name for herself in finance. She served as vice president at the former Chemical Bank and at PaineWebber & Co. During the savings and loan failures in the 1990s, she accepted a key executive position with the federal agency that successfully resolved the crisis.

In 2020 Ann’s husband, Jess, died after an extended illness that she described as “emotionally and financially shocking.” She began considering how some of their assets could be redirected to help Mount Holyoke students whose home lives are unstable. That led to a bequest for a scholarship fund.

“My years on campus — 1968 to 1972 — were a time of economic, political and social unrest. In a sense, it parallels what current students are experiencing,” she said. “I thought about how I adapted, but that was 50 years ago.

“We don’t know how the current upheavals will play out or what careers will emerge. Students need the flexibility to prepare for the unknown, which is why I didn’t restrict the fund in ways that would be limiting.”

In fact, Ann’s professional success stems from her own pragmatic refusal to be limited. After graduating from Mount Holyoke, she worked for several years before setting her sights on a career in urban planning. A year into her master’s program, funding for the Model Cities Act and other Great Society initiatives started being cut.

“In any profession, you have to get your foot in the door, and these doors were closing fast. I didn’t see a path to making an impact,” Ann said. “I quit. It was the smartest thing I’ve done.”

That decision — and Ann’s flexibility — led her to an MBA program that, in turn, led to a multifaceted career she loved. She started out in the sales and trading division and quickly moved into public finance investment banking. Ann’s specialization was structured transactions, an area utilizing her creative and analytical talents as well as her knack for inventive problem solving.

When Ann selected Mount Holyoke as the recipient of a bequest, she knew that her gift would be in good hands. “It’s an institution I can trust,” she said. “MHC has a track record of good management.”

As she celebrates her 50th Reunion, Ann expresses enthusiasm about curricular initiatives, such as the Fimbel Maker & Innovation Lab. She believes that innovation, combined with a broad set of skills for looking at the world and the intellect of a remarkable peer group, opens new doors for graduates to make an impact.

“There’s something else too,” Ann said. “Something my contemporary Wendy Wasserstein ’71 referenced when she delivered the 1990 Commencement address. Wendy said, ‘What may well resonate in your later life is … the sense of self that you formed here.’

Learn more about giving through your will.