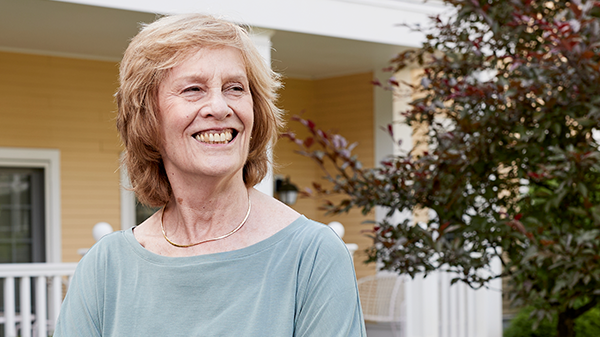 As a high school student in Michigan, Laura Bernstein ’65 felt a connection to Mount Holyoke. Her mother graduated from Barnard and a sister from Vassar. She knew the reputations of many women’s colleges, but Mount Holyoke was the one she could envision attending.

“I had the impression that many students, as I did, came from public high schools. That turned out to be true,” Laura said. “For our early 1960s era, there was a range of social backgrounds. All the differences made for a fascinating community…which I’m still enjoying today!”

The College’s institutional commitment to attracting and welcoming an array of students is a large part of what inspires Laura’s giving. While she’s a faithful donor to The Mount Holyoke Fund, her priority is supporting the endowment “because the funds you donate support the College year after year after year.”

Laura admits that as a student, she never imagined being an active donor. Her arrival in South Hadley came in the aftermath of family upheaval. Though her family wasn’t wealthy, her upbringing was comfortable and secure. Increased scholarship support and an attached waitressing job helped her to make ends meet.

“You’re just trying to survive! There was pressure to maintain a certain grade average to keep the scholarship.”

Laura credits new Mount Holyoke friends with helping her through by referring her for summer jobs and sharing their families at holidays and during breaks. And a family friend in nearby Westfield (granddaughter of former trustee and donor Henry A. Stimson) took Laura under her wing. Almost five decades later, Laura endowed a scholarship fund in her (Lucile Harvey Thomee’s) honor. Another endowed fund honors Dorothy A. Carey, an English cousin of her mother, who sponsored a three-month stay in England for Laura after graduation.

“These women stepped up to help me in that stage of my life. I wanted to recognize them and begin to do for others what they did for me.”

Laura’s major was economics, which she found quite challenging. A turning point came when Professor of Economics Sally Montgomery provided Laura with encouragement. She went off by herself to work through a particularly difficult concept and methodically made sense of it. Montgomery’s positive reaction, Laura said, gave her confidence in her ability to think clearly. She also recognizes other ways Mount Holyoke prepared her for life and career.

“I found most of the courses challenging. I was required to do the work, and perform at certain standards. I didn’t always succeed as I’d hoped to, but I began to develop helpful mental habits.”

Mount Holyoke’s reputation helped to open the door to Laura’s first jobs in finance and investments, one at the former Bank of Boston. As a woman, she received a smaller paycheck than her less-qualified male predecessor. She persevered, eventually spending 20 years at a trust company in Boston where she ended up working on endowments for nonprofits and with families, doing their financial planning. In 1992 Laura was named the company’s first female inside director.

Her day-to-day work meant Laura knew the ins and outs of planning for retirement. In 2000 she was on the brink of retirement and was going to have to cash out highly appreciated assets. She contacted Mount Holyoke to create a charitable remainder unitrust. “I needed extra income for retirement, and the accompanying tax deductions were helpful. The fact I could provide for myself while also ultimately giving to the College was ideal. Better yet, the advancement staff handled many of the mechanics, including drafting the trust agreement.”

Laura’s planning, in fact, helped her to retire early and maintain a secure lifestyle. She and her husband currently live in a retirement community in Eastern Massachusetts, where she’s active with both a short story group and a theater group. More and more, she finds herself appreciating the way that Mount Holyoke helped her build a base of habits around thinking in both creative and balanced ways.

“Of course, this benefitted my career and helped me on various investment committees and boards. What it gave me for life, however, is the orientation toward challenging established verities! Your current judgments have evolved through life and are likely different from what you’d concluded at age 30, 50 or 70.”

Mount Holyoke, Laura believes, expects students to look beyond their surrounding views and think independently. The implications of that ripple out far beyond the institution and even beyond the lives of individual students.

“The future needs leaders who can think clearly and beyond prejudice, adapt to rapidly evolving circumstances and make judgments…which they may have to revise! I’m counting on Mount Holyoke to prepare students for such a world!”