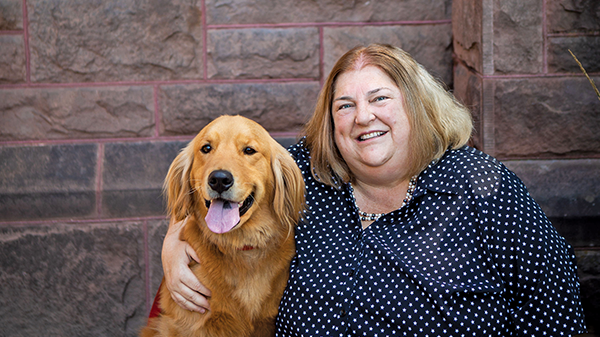 Growing up in South Hadley, Rhae A. Kennedy ’81 regarded the Mount Holyoke campus as her backyard.

“I knew the library, the lakes, the sound of the clock tower bell chiming the hour,” she says. “My parents — who worked hard in low-paying jobs—were determined that I attend Mount Holyoke.”

When her strong academic record earned Rhae early decision admission and a full scholarship, she discovered that those familiar campus gates were, in fact, the threshold to another world.

“I met people from different backgrounds and other countries. New ideas mingled with a sense of tradition. Mount Holyoke challenged me to think about issues and make connections. It changed my life.

A day student, Rhae carried a full course load while working 30 hours a week at a local grocery store and doing consulting projects. She’s grateful to have had the chance to live on campus during the spring semester of her first and last years. The experience provided her with an immersion in campus life and forged a lifelong friendship.

“Incredibly, my roommate, Laurel Fremgen-Hamilton, was another South Hadley resident. We’d known each other in high school, but now Laurel is like a sister even though she has lived in Germany since graduating.”

Rhae, however, stayed local. The week after graduation, she joined Massachusetts Mutual Life Insurance Company (MassMutual) in Springfield as an actuarial analyst trainee. Thirty-eight years later, having worked her way up in a male-dominated industry, she retired as managing director, head of investment analysis.

Throughout her career, Rhae consistently supported Mount Holyoke. Her gifts, she says, started small and increased with her means. When she received a lump sum payment from MassMutual in 2019, Rhae approached Mount Holyoke about creating a deferred charitable gift annuity.

“While the College is a significant beneficiary in my estate planning, the annuity helps me now. It reduces my current tax liability while guaranteeing a future income stream. Later on, it will benefit Mount Holyoke,” she says.

In addition to providing financial support for incoming students, Rhae wants her annuity to help Mount Holyoke plan and implement cutting-edge initiatives. She remembers the computer terminal in the basement of Dwight Hall and how a half-semester course offered students access to an emerging field. At the time, she says, students put data on punched cards, read them onto tape, and brought the tape to UMass Amherst to be processed.

“Not only was the class fascinating, but it also provided me with an advantage at MassMutual, where computer terminals were being used and desktop computers soon would be introduced.”

Rhae also credits her liberal arts education with helping her advance from an entry-level position to an executive one. “Problem-solving skills can be applied to everything in life. They’re a gift you don’t even realize you’ve received until much later.”

For a few years, Rhae had the opportunity to assist with MassMutual’s on-campus recruiting. Although she already knew that the College enrolled accomplished students, she recalls being astounded by their level of motivation and social commitment.

“Rather than focusing on just their little slice of the world, they were acting globally — in Africa, one was helping build a school for girls, and another was helping develop clean water sources,” she says. “Meeting them only underscored my belief in Mount Holyoke’s mission.”

Another benefit of working at MassMutual was having alum co-workers from a range of classes. Along with being colleagues, the informal alum group gathered annually to celebrate Mountain Day with ice cream. One longtime co-worker, Tracy Plass ’80, retired on the same day as Rhae, and their friendship continues in retirement.

Looking forward, Rhae anticipates finding other ways to support the College. “I believe that Mount Holyoke is the right kind of education for the long term. I’m excited to see how Mount Holyoke evolves to meet the challenges of tomorrow.”

Learn about other ways you can give.