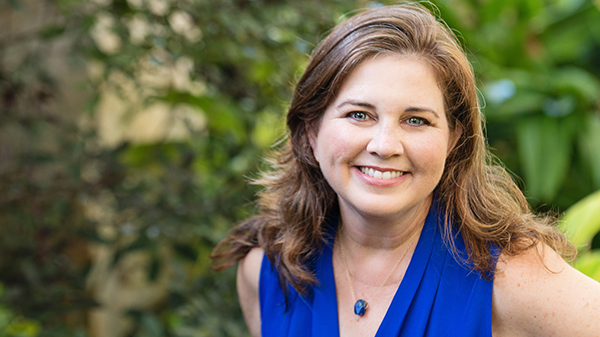 For Keith Landon ’91, it all comes down to Mount Holyoke alumnae. She went to Mount Holyoke — sight unseen — because of them. She became a member of the Mary Lyon Society because of an inspiring alumna. And she continues to be a deeply involved alumna in her community.

A self-described military brat with an unusual first name — her mother’s family name — Landon was a bit shy, a byproduct of frequent moves. She knew Mount Holyoke’s reputation for academic rigor, and that it was the oldest of the Seven Sisters. But when it came time to choose a college, meeting local alumnae at an event for accepted students was the deciding factor.

“They were this diverse, interesting, intellectually stimulating group of women,” Landon said, who first saw the College on her first day of school. “They were all ages. It was a pretty small group, but there was just something about them. Something clicked.”

She jumped into everything Mount Holyoke, from the Model United Nations to the Mount Holyoke News. She did a semester abroad in Australia. She took six weeks of golf at The Orchards, the College’s famous course. An inexperienced rider, she took two semesters of riding classes.

“What I loved about riding was much like everything that I experienced at Mount Holyoke,” she said. “They wanted you to dig in and get your hands dirty. We had to tack up those horses. We had to clean up after the horses, to curry them. To me, that’s emblematic of Mount Holyoke. Our alumnae are going to roll up their shirt sleeves and get to work. They will do what has to be done.”

An American studies major — “a great interdisciplinary major for those of us who love too many things to decide on any one thing to study” — Landon took Spirituals and the Blues with John Grayson, now professor emeritus of religion, and a seminar in poetry with Christopher Benfey, Andrew W. Mellon Professor of English. She loved the Mount Holyoke College Art Museum and took several art history classes.

By the time she graduated, that shy student had gained a self-assurance that she’s carried with her through paid and volunteer work for nonprofits and in communications after college, Landon said.

“I am not afraid to try something new,” she said. “I am willing to learn, to ask for help. I have an innate confidence. I think, ‘I’ve got this. I might not be perfect at it, but I can learn it.’ That confidence came from those four years.”

A member of the Mount Holyoke Club of Southeast Florida, Landon carries that confidence with her today. Her club works closely with the Posse Foundation, with which Mount Holyoke has partnered since 2010. The national organization identifies and recruits diverse students with academic and leadership potential who risk being overlooked. Mount Holyoke provides a full-tuition scholarship to each Posse student.

“The Posse Foundation has been wonderful to work with,” Landon said. “We meet the young women who are considering Mount Holyoke. We do M&Cs — we bring milk and cookies — and usually about five to eight alumnae, and we talk with the students and share stories.”

Today, she feels a tremendous amount of responsibility when she meets the young people who are considering Mount Holyoke, she said. “I think back all the time to those women I met all those years ago. I think, this could be it, it could be this one conversation that could make a difference to someone trying to make a decision about what they're going to do.”

In thinking about giving to the College, yet again Landon was inspired by another alumna. She had gotten to know Anne Vittoria FP’05, director of gift planning, whom she had met at College events over the years. Landon was already a monthly donor when Vittoria suggested she consider funding a deferred charitable gift annuity, creating future income for herself and a legacy gift to the College.

“As a fellow alumna, Anne was an inspiration to me,” Landon said. “I thought, an annuity is something tangible I can do. I can give to the College in a different way from just my usual annual gift. And it's important for my family — and my fellow alumnae — to see that not only do I give my time to this institution by volunteering, I also contribute, as part of paying it forward to future alumnae.”