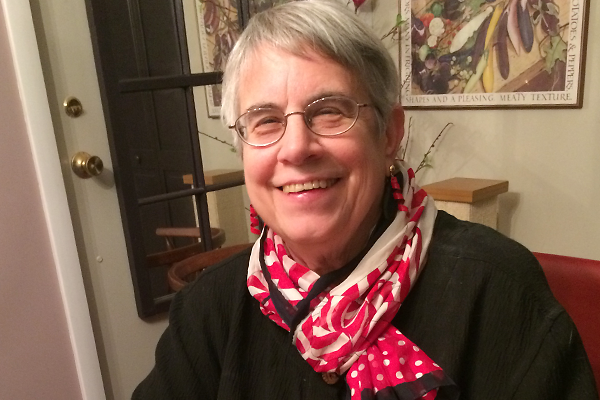 Ruth Rotundo Whitney ’66 may hold the record for the earliest application to Mount Holyoke: she started her application in eighth grade!

“My grandmother's dear friend, legendary admission director Harriet Newhall, was retiring and wanted to open my file — in 1958,” says Ruth. Luckily, Mount Holyoke and Ruth continued to be interested in each other, and in 1962 she entered by early decision. Ruth majored in history, wrote lyrics for Junior Show and was the head of Blue Key.

Ruth spent her working life as a social worker. When she retired, she received the Simmons School of Social Work's Distinguished Lifetime Career Award for her services to the family court and divorcing families. Ruth now belongs to three book groups, attends theater, plays bridge, and serves on several boards. This fall she begins a three-year term as chair of the board of Cambridge Family and Children’s Service.

“My college friendships have endured and grown over the years. I have never missed a reunion, have served as a class officer and currently belong to a Mount Holyoke book group.” Each spring, Ruth makes a three-week trip to London with Norma Davenport ’66, her first-year roommate.

“Because I was self-employed for most of my career, I wanted to secure a guaranteed income stream for retirement.” Ruth’s financial interests and deep connection with Mount Holyoke led her to establish a deferred gift annuity with the College when she was in her late 50s. She received a significant tax deduction when she made the gift and is now receiving a steady income — a portion of which is tax-free.

“As a way to honor four generations of Mount Holyoke family members and the College that has been a consistent presence through my whole life, I established an endowed fund named after my mother, Barbara Bristol Rotundo ’42.”

Ruth’s family connections to the College run deep. Her grandmother, Ruth Bristol ’18, along with several great aunts, attended Mount Holyoke in the early 1900s. Ruth’s sister, Peggy Rotundo ’71, is on the board of the Frances Perkins Center in Maine. Her niece, also named Barbara Rotundo, is a current Frances Perkins scholar who runs a mentoring program in the computer science department.

“Not surprisingly, I chose to have the fund ensure that Frances Perkins scholars have the same access to opportunities as traditional students.”

Ruth plans to continue her support of the College by making her annual gifts via pre-tax donations from her IRA. “With the new tax laws in effect, my tax advisor anticipates that I will no longer be itemizing deductions, making gifts from my IRA particularly beneficial.”