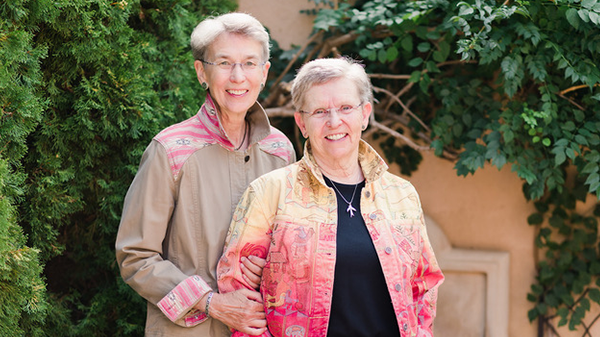 Catharine “Cat” Scheibner ’73 (left) with her wife, Carrie Haag, near their home in New Mexico.

Throughout Catharine “Cat” Scheibner ’73’s full life, Mount Holyoke has been her touchstone, right from her first visit.

“I fell in love with the campus,” she says simply. “I love the setting. I love the rural aspect of it. Some of my favorite memories are of Mountain Day and walks around Upper Lake.”

Scheibner also loved the opportunity to indulge in deep friendships and to focus on athletics — she played varsity field hockey and basketball, and club lacrosse in its pre-varsity days. A politics major, she was deeply influenced by the legendary Victoria Shuck, who ran an internship program in Washington, D.C.

“Vicky Shuck was a character,” says Scheibner, who spent two summers interning in Washington. “She was larger than life. One day we were on the Hill and there’s Teddy Kennedy [the U.S. senator from Massachusetts, another legend] and he goes, “Vicky! Oh, it’s so good to see you!’ She just knew everyone. She could personally connect you — there were no computers then — with everyone.”

One of those connections put Scheibner in the Congressional office of Ella T. Grasso, Mount Holyoke class of 1940. Grasso went on to become the governor of Connecticut three years later, the first woman elected governor independent of an incumbent husband.

Much as she loved what she was studying, Scheibner was thinking about a different career path.

“I realized that I really wanted to pursue a master’s degree in physical education,” she says. “But it took me until senior year to screw up my courage to tell my parents.”

Scheibner went on to earn a master’s degree at Smith College and coach college sports. Then, turning back to her original focus, she earned a law degree at Northeastern University School of Law.

The Mount Holyoke connections kept coming. Scheibner had been volunteering in the College’s development office since she graduated, and now that experience came in handy when she landed a position as the first staff person for EMILY’s List, the Democratic women’s fundraising organization.

The College came through again when a favorite law professor, Judy [Olans] Brown, class of 1962, helped her get a job as the law school’s first director of development. Scheibner’s first call was to the College’s development office.

“I said, ‘Help! I have to create an entire development operation for my law school,’ Scheibner says. “They invited me to campus, gave me a crash course and sent me on my way with my marching orders.”

Scheibner hasn’t taken the support of her alma mater for granted. She started giving back by donating to The Mount Holyoke Fund. She’s also given to the Library Building Fund and Mount Holyoke athletics.

“Giving to a place that was so significant in my development as a person, and as a woman, is important to me,” Scheibner says. “I really believe in women’s education. There’s a huge difference when you’re in a coed setting.”

Giving to Mount Holyoke was an easy choice for Scheibner’s wife, as well. Carrie Haag, a clinical social worker and the former head of U.S. Field Hockey, understands the College’s lifelong influence and support of Scheibner.

“When we talk about what's important to us and how we can give back, Mount Holyoke is at the top of the list,” says Haag. Together for more than 30 years, the two were married in 2012 and are now retired in Sante Fe, New Mexico.

“Meeting Cat’s college friends and hearing her talk about Mount Holyoke and her reunions, I knew how much it was a part of her and who she is today. I knew she would want to give to Mount Holyoke, and it was really something I wanted for her too.”

In 2018 they created a flexible deferred gift annuity in anticipation of Scheibner’s 50th reunion in 2023, the second annuity that Scheibner has created with Mount Holyoke. The residuum of this gift will be added to the Scheibner Family Fund for Athletics, which had been created earlier with her parents.

“A charitable gift annuity is a win-win for Mount Holyoke and the donor,” Scheibner says,  “especially if you’re looking to diversify your retirement income. It gives you a steady income stream. You know exactly how much you will be receiving. You can start it when you want. It can cover your spouse too. It’s tax-deductible. What’s not to love?”