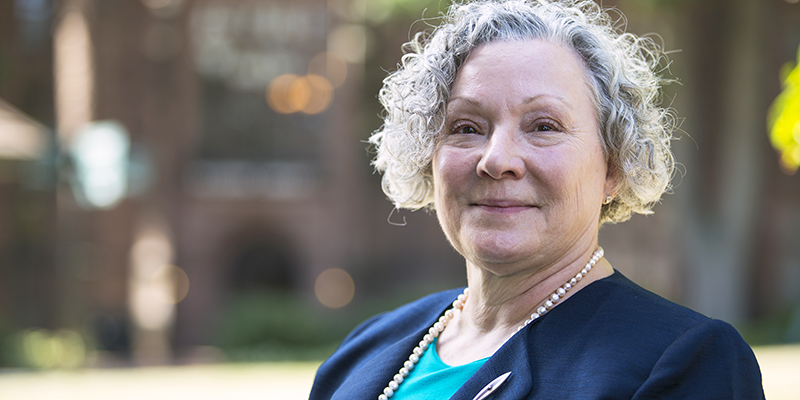 For Maria Mossaides ’73, the decision to establish a deferred charitable gift annuity wasn’t just about supplementing her income later in life. Her primary concern, she says, was ensuring that she could continue making Cornerstone-level gifts—annual contributions of at least $1,837 to The Mount Holyoke Fund—even after retirement.

“The deferred charitable gift annuity offered the solution,” says Mossaides, an attorney who has championed child welfare throughout her career. “It will allow me to maintain my annual giving.”

After majoring in political science and East Asian Studies, Mossaides earned a JD from the State University of New York at Buffalo and then an MPA from the Harvard Kennedy School. She went on to hold senior positions in the Commonwealth of Massachusetts’ Executive Office of Health and Human Services; Administration and Finance; and the Judiciary. As Acting Commissioner of the Office of Children, she successfully advocated to permit the reporting of institutional abuse and neglect. In 2015, Mossaides was appointed as the Commonwealth’s Child Advocate, an independent position that monitors services provided to children. Simultaneously, she has supported Mount Holyoke by assuming positions ranging from chair of the Annual Fund Committee to Head Class Agent.

Mossaides credits the College with preparing her for every role she has held. “Preparing and encouraging me,” she adds.

Though her family was progressive, she says the Greek community she grew up with expected young women to pursue traditional paths. “I turned 18 just days after arriving on campus and remember thinking, ‘This is the first time I have been in a place where it is okay to be female and smart.’ To me, that was the greatest gift.”

As a new graduate, Mossaides began giving what she could to thank the College “for the training, the support, the friendships—for everything.” In particular, she was determined to repay Mount Holyoke for her scholarships. It wasn’t until she had donated the same amount as her scholarships—with adjustment for inflation—that Mossaides felt she actually was making gifts to Mount Holyoke.

When her daughter, Sophia Apostola, graduated from Mount Holyoke in 2004, Mossaides found her mind-set shifting from one of giving back to one of paying it forward. Now she gives—and intends to keep giving—to provide access for a new generation of women.

“Two centuries after Mary Lyon pioneered higher education for women in the United States, we need to globalize the opportunity she envisioned,” says Mossaides. “When young girls are having acid thrown in their faces for seeking education, the mission of Mount Holyoke is not over. We need women leaders who will champion women’s issues across the world.”