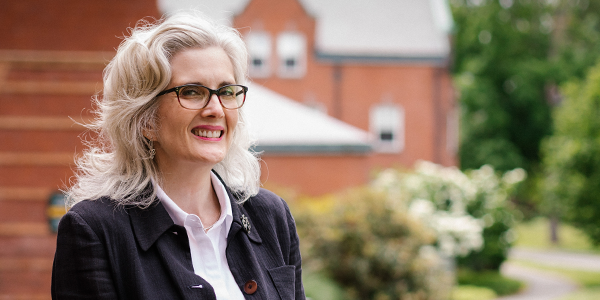 Ever since she contributed $19.90 toward her class’s senior gift, annual giving has remained a priority for Diana Brassard ’90. Having benefited from scholarship aid, she wants to help other students access a Mount Holyoke education. In addition to making annual gifts to The Mount Holyoke Fund, Diana also recently established a deferred gift annuity.

Diana came to Mount Holyoke from New River, North Carolina. She was raised in the South as part of a military family, and her childhood included biannual trips to visit both sets of grandparents living near South Hadley. When Diana began her senior year of high school, her mother encouraged her to consider Mount Holyoke.

“I kept asking my mother different questions about the College, thinking she wouldn’t want to keep researching. But she did, and when I learned the incredible percentage of students who went on to graduate school, I was astonished. In the end, I applied early decision.”

Diana arrived on campus with the goal of studying chemistry and eventually getting a Ph.D. Then, two weeks later, while sitting with friends in the Porter Hall dining room, a sophomore mentioned biochemistry.

“I heard the word ‘biochemistry’ and knew it was what I’d been waiting for,” Diana recalls. “It was as though heavenly music began playing.”

Though the memory of that moment makes her laugh, the epiphany did, in fact, change everything. Diana switched her major to biochemistry and never looked back. She had the opportunity to conduct research throughout her undergraduate years with Professor Lilian Hsu. She also received funding to spend a summer doing research at the National Institutes of Health. Diana’s senior thesis focused on RNA transcription, and then she headed off to Northwestern University to study influenza for a Ph.D. in biochemistry, molecular biology and cell biology.

Now a Director in Global Development Operations at Takeda, a global pharmaceutical company, Diana oversees various project management and alliance activities for clinical studies with strategic clinical research partners. It’s a role that draws not only on her training as a scientist but also on the writing, problem-solving and leadership skills she developed at Mount Holyoke.

“My alma mater gave me a lot,” says Diana. “I met wonderful friends. I was mentored and encouraged. Mount Holyoke has been the foundation for a meaningful, long and fulfilling career.”

Speaking about her decision to establish a deferred gift annuity, she adds, “I’m very grateful to be at a point in my life where I can make this gift to my alma mater. I appreciate the ways it benefits my retirement planning, and I value having the chance to pay it forward so that Mount Holyoke women in STEM — and every other field of study — get the support they need.”