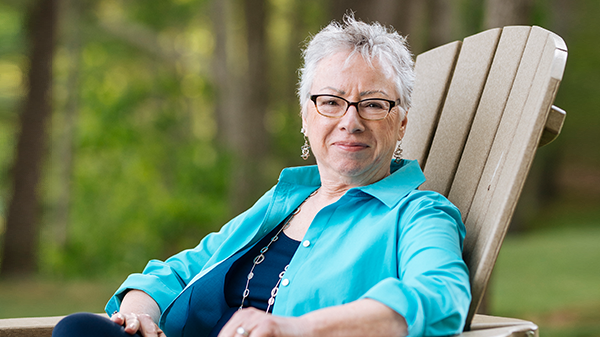 For Susan Bateson ’76, the moment of clarity about what Mount Holyoke meant to her happened the day before her Commencement.

She was waiting to join the annual Laurel Parade, with alums dressed in the traditional white, adorned with their class colors and carrying festive signs.

First in the procession were the oldest graduates, including some from the beginning of the 20th century. They waved from their classic convertibles as they were chauffeured by. The rest of the reuning classes marched past, the earliest years first. Bateson and the other graduating seniors fell in last, draped with the laurel chain.

“It was clearly the moment of generations of women who were strong and confident, well educated and committed,” Bateson says. “The older alums were vibrant and engaged and having a blast — obviously still caring about where they went to college. Being part of that community felt very special and unlike anything I had experienced before.”

With that as her inspiration, she started giving to the College right away. “I wouldn’t have gone to a place like Mount Holyoke without financial aid. I was the oldest of four. My dad was a teacher; my mom was a nurse. So when I was asked to pay it forward, I thought, how could I not?”

That Commencement memory resurfaced some years later. After giving a leadership gift in honor of her 25th reunion, Bateson was invited to a reception with others who had given similar or greater gifts.

“I walked into the President’s House, and I thought, it’s the Laurel Parade again,” she says. “It’s people giving back and knowing that this place matters and needs to be continued.”

“How could I not?” resurfaced again as well. After a career working at several commercial banks, Bateson was recruited to a biotechnology firm to head its human resources division. “I loved my work,” she says. “I was getting to build exactly the kind of workplace culture in which I wanted to work.”

While at the firm, she had a pivotal conversation. “First I met with an MHC development officer, and then I met with the chair of the capital campaign. And they asked me to consider a gift of more money than I’d ever considered,” she says. “As I sat across the dinner table, I was thinking, ‘You’re crazy! I couldn’t possibly give that much money to Mount Holyoke.’ And later that night I thought, ‘Well, how could I not give that much?’”

Bateson continued to increase her gifts to the College with subsequent capital campaigns. “While there are a number of charities that I care about and support, the place that potentially has the biggest impact is a place like Mount Holyoke,” she says. “Mount Holyoke transformed me. So I know it has the capacity and the ability to transform others.”

She contributed in other ways, as well. In 2005 she was asked to join the Board of Trustees. She served until 2015, helping guide the College through the turbulent times of the Great Recession. Bateson also served on a capital campaign steering committee and the Major Gifts Committee for the Virginia/Washington, D.C., region.

Giving back to Mount Holyoke is a core element of Bateson’s financial planning. Looking at her assets, she realized that giving appreciated securities during her lifetime made the most sense financially and would allow her to make larger gifts. In her 40s, she named the College as a beneficiary of her trust.

A self-described loner, Bateson found a place for herself at Mount Holyoke. Her connection to the College is deep, but it isn’t rooted in the lifelong friendships that she often hears reflected by others. “Mount Holyoke gave me a place to be who I was, and I still feel as strongly about the College. For me it’s simply, I know deeply in my heart that it was my launching place. And that’s what I needed, a place that would help launch me.”