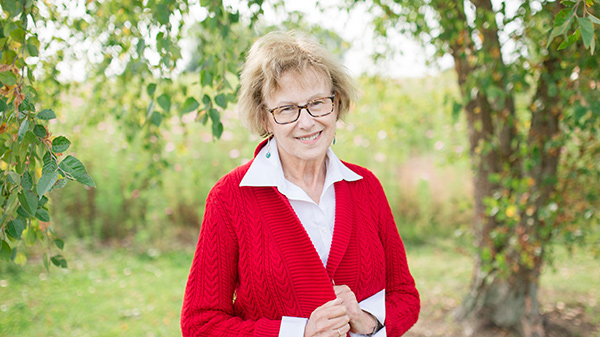 Anne Marsh Fields ’71 distinctly remembers her first glimpse of Mount Holyoke College. She was 12, and had traveled with her family from Winnetka, Illinois, to visit relatives in Connecticut.

“A cousin, whom I regarded as particularly glamorous, drove me and my younger sister to a family reunion in South Hadley,” Anne recalls. “We were in her dark green MG Midget and she had a silk scarf around her neck. As we drove through South Hadley she pointed out the College to me. That was my first impression of Mount Holyoke: glamour and a certain mystery.”

Although Anne’s subsequent decision to apply to MHC was influenced foremost by the College’s academic reputation, that long-ago moment still stands out.

Now, as her 50th Reunion approaches, Anne has expanded her longtime support of Mount Holyoke by establishing a bequest in her will. The gift honors her parents, both for raising her and making her education possible.

Anne majored in English composition with the goal of earning a Ph.D. in English and teaching at the college level. She married right after graduation and moved to Iowa City for her former husband’s graduate studies. At that point — for practical reasons — she put her ambitions on hold and earned a master’s degree in library science. As she followed her husband’s career to different locales, Anne worked in a variety of library settings and raised two sons.

While employed part-time at the University of North Carolina at Chapel Hill, she took the leap and became a graduate student in English. Eventually, she was able to enroll full-time and was awarded a doctorate in English in 1992. That, in turn, led to a 14-year career as a librarian and English department liaison at Ohio State University’s Thompson Library.

Anne, who attended MHC during the Vietnam War and the civil rights movement, credits being at the College at that time in history with changing her worldview.

“Those smart, passionate women prodded me to look around in new ways. I learned to speak up,” she says. “I may not have realized it until years later but I turned out to be a different kind of person because I went to MHC.”

Field’s bequest will help future students experience their own transformations at Mount Holyoke.

“In the Alumnae Quarterly, I read about the incredible things new students are doing and the wide-ranging places they come from. I look at their faces and want to contribute to their pursuits and to what must be coming in the future.

“I’m amazed by what is going on now. It proves to me that Mount Holyoke is the best place to put my money.”