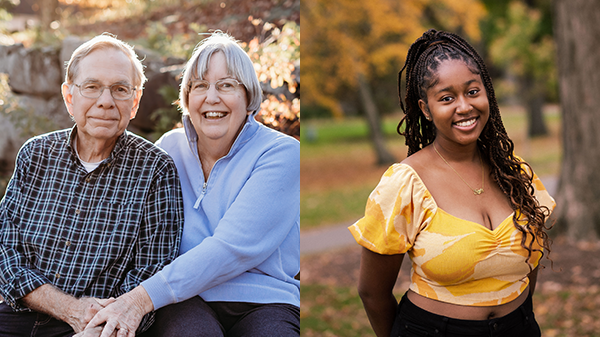 Before November, Kayla Samuel ’23 would have described Judy Parker Stone ’68 as the generous alum whose endowed scholarship fund — the K. Hems Fund — supports her financial aid package. Judy, in turn, would have described Kayla as the author of lovely thank-you notes and the second student to benefit from the scholarship fund she and her husband, Bill, established in 2017.

Though their lives were interwoven, the two had never spoken. That changed this fall, when they met via Zoom. Despite more than 50 years separating their time on campus, the connection was immediate. They told stories of finding their way to Mount Holyoke, favorite traditions — Convocation for Kayla and the Laurel Chain for Judy — and how the College had challenged them academically and personally.

Judy recounted growing up knowing the Seven Sisters colleges as “the pinnacle of education for women.” Though her guidance counselors in Yardley, Pennsylvania, suggested she apply to some of Pennsylvania’s outstanding public colleges, a friend urged her to consider one of those groundbreaking women’s colleges.

Judy said she immediately fell in love with the Mount Holyoke campus when she arrived to interview in February 1964. She remembered that first sight of Mount Holyoke’s Gothic-style buildings dusted with falling snow. More captivating, however, were the students she met that day. “Each was intellectually curious and ambitious in her own way. I remember thinking, ‘I could really enjoy going to school here,’” said Judy. “And the rest is history.”

As a student, Judy majored in sociology. After graduation, she taught elementary school in Ann Arbor, Michigan, before moving to Hopkinton, New Hampshire. There she volunteered in the public schools while raising her son and two daughters. When her children were older, Judy became a reading recovery specialist — it was a career she loved.

Kayla, who grew up in Harlem, first saw Mount Holyoke’s campus during Focus on Diversity, a weekend program for prospective students. She’d researched Mount Holyoke when it was recommended by her college counselors at the Success Academy, a K–12 charter school based in Manhattan.

“I visited in October. The campus was so beautiful with stunning foliage. But the students I met made the biggest impression. I knew I belonged here,” Kayla said.

A dancer since age 5, Kayla is pursuing a double major in dance and psychology. She’s active with the African and Caribbean Students Association and serves as the outreach coordinator for the Association of Pan-African Unity. She’s also the cocreator of the Black at MHC Instagram account.

“I never envisioned overseeing content and interacting with people throughout the Five College Consortium and beyond,” she told Judy. “Mount Holyoke has changed my life and my perception of who I am.”

Kayla’s experiences and growth are precisely why Judy has been a longtime Mount Holyoke Fund donor and Mary Lyon Society member. “From my first gift of $5 back when my husband and I were living paycheck to paycheck to participating in the recent Meet the Moment Scholarship Challenge, I want to help Mount Holyoke offer a transformative education to students from diverse backgrounds.”

In Kayla and her classmates, Judy sees a new generation learning — just as she and her daughters did — that they can succeed.

Kayla, in return, looks to Judy as a role model and guide. Current students, she told Judy, want to connect with alums and hear their stories.

“We know you paved the way for us. Someday we’ll do that for others.”

Learn about gifts through your will.