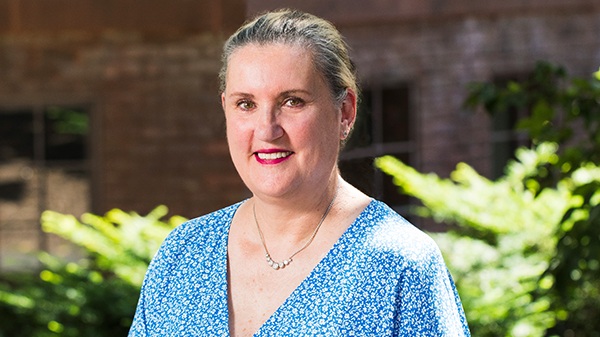 Ellen Walsh ’85 — a principal program manager at Adobe Acrobat — discovered Mount Holyoke through an admissions brochure. Between the strong academics and the beautiful campus, she was sold. Plus, the location wasn’t too far from her family in West Hartford, Connecticut.

“In truth, I didn’t give any thought to it being a women’s college,” recalled Ellen. “Growing up, I’d moved frequently but always attended Catholic schools. I just wanted a different experience.”

What Ellen got was more than she ever anticipated: “I found my people and my voice. Mount Holyoke was transformative.”

Financial aid opened Mount Holyoke’s door for Ellen. Her sister, Kathleen Walsh ’88, arrived on campus when Ellen was a senior. “Kathleen also received financial aid. I want to help other siblings, whether biological, adopted or foster.”

In gratitude, Ellen is creating an endowed scholarship fund, one that breaks new ground. It is the College’s first scholarship designated specifically for siblings.

As a 15-year employee at Adobe, Ellen accumulated a substantial amount of company stock. When her financial advisor encouraged diversifying assets and creating an annuity, those shares became the means to invest in both Mount Holyoke and her future.

Ellen created a deferred gift annuity that provides her and her husband, Thomas Carter, with tax savings now and an income stream after retirement. Later, the proceeds of the annuity will endow the scholarship fund. “It’s a win all around,” she said.

Ellen, who works on machine learning projects, admits she’s continually surprised by her career in high tech. She arrived at Mount Holyoke as a French major whose sights were set on spending junior year in Paris. She achieved that goal, complete with climbing to the top of the Arc de Triomphe, exploring the catacombs and sitting at lots of cafes. Then, upon returning to campus as a senior, Ellen changed her major to politics.

In Boston after graduation, Ellen tried an academic administrative support position but desired a faster-paced setting. While visiting an aunt in California, she registered with a temp agency and spent three weeks at Sun Microsystems, a pioneer in computer workstations. After learning how to use a Unix vi editor, Ellen quickly and correctly edited a batch of files.

“My supervisor kept giving me more and more to do. The work was such a joy,” she said. “When I returned to Boston, I wanted to be an administrative assistant to the director of training at a software company.”

As fate would have it, Ellen found a posting for that dream job immediately upon opening the newspaper. In an era when computer science majors were rare, she was hired because of her Mount Holyoke liberal arts education. She soon transitioned from providing administrative support to doing quality assurance. Ellen subsequently worked with several start-ups as part of their quality teams. When the last one was acquired by Adobe, Ellen made her move into project management.

“Throughout my career, I’ve often been the only woman at the table. Because of Mount Holyoke, I was accustomed to having my opinions heard. And if I wasn’t being heard, I didn’t have trouble making myself heard.”

Along with giving back to the College that changed her life, Ellen feels motivated to support Mount Holyoke for other reasons.

“Apparently, we’re going back in time,” she said. “As a gender diverse institution, Mount Holyoke champions women’s rights and LGBTQ+ rights. I want to be part of that.”