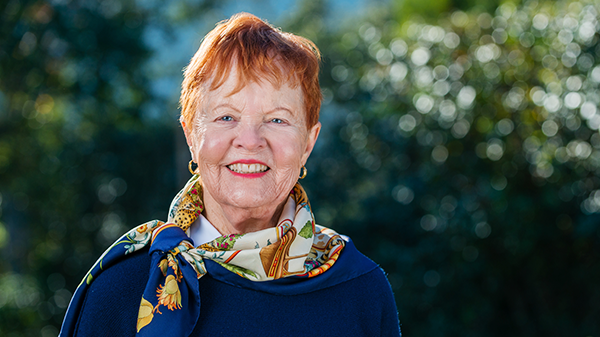 A snowstorm made Pat Kennedy Ascher ’60 late for her interview at Mount Holyoke College. When she finally arrived, she was met by Harriet Newhall, the College’s famed admission director. “She was a real character, dressed in her Harris tweed suit and her hair done up in a chignon,” Ascher said. “She said, ‘Miss Kennedy! Where have you been!’”

They sat down to talk and Ascher expressed concern that her SAT math scores were too low. “Miss Newhall said, ‘Miss Kennedy, we want you!’ And that was that.”

Ascher moved away from math and majored in English, taking almost every English course in the catalogue.

“I found my own writing voice in American literature, with Marjorie Kaufman, then a professor of English,” she said. “I remember the moment when I realized that what I had to say might be valuable. Mount Holyoke gave me the ability to write well and think straight, think logically, to connect the paragraphs. These are valuable skills. Our world needs these thinking skills.”

She could also see the overall value of a liberal arts education, although hers did not always come easily.

“Chemistry freshman year almost killed me,” Ascher said. “I had to quit the tennis team or fail chem. Nothing else has ever been as daunting as that class. You realize, this is not going to be a slam dunk, this is going to be a lot of work. Physiology the next year was so much better. Now I’m so glad I had those science classes. My husband and I have traveled all over, from the caves in France to the Everglades. The science I had at Mount Holyoke gave me an intellectual foothold.”

The beauty of the campus wasn’t lost on her either. “Looking out my dorm window and watching the snow coming down before Christmas break is one of my favorite memories,” she said. “The beauty of the surroundings of that college! It seeps into your soul. It really feels like a part of you. That’s why we all go back so much.”

Mount Holyoke continued to stay a part of her life in ways small and large. Ascher married two weeks after she graduated and started a family. Volunteer work in the schools and for PBS led her to teaching and then, after her divorce, to a job at United Way. “I got the job because of my Mount Holyoke degree,” she said. “For any career, in any job that I wanted, Mount Holyoke was certainly a selling point.”

She ran a variety of United Way fundraising campaigns, from city and county to the organization’s Asia campaign. “I learned fundraising upside down and backward,” she said.

Her volunteering for the College led to a position on the Advancement staff for nearly two decades. She retired in 2007. “I worked with about 200 families on major, long-range gifts to the College. All were exceptional women who had done amazing things.”

Ascher was a natural for the position, especially given that she’d started volunteering for the College after graduation, when she founded the Junior Mount Holyoke Club in Philadelphia. Since then she’s cochaired Reunions, served as class president and as a gift co-chair for her 50th Reunion, and now sits on the Beyond the 50th Committee.

As an alumna, she has added to the circle of deep friendships she formed as an undergraduate.

“I don’t know what it is — the setting, the history, the famous professors,” she said. “The friendships are very special. And now because of my volunteering, I have more great friends, women from other classes.”

Naturally, she also contributes to the College. In addition to annual gifts to the Mount Holyoke Fund, she started funding deferred charitable gift annuities when she was 57. She learned about them from alumnae, some of whom had established deferred annuities year after year, providing reliable income in retirement.

“These types of investments helped them feel secure in their senior years,” said Ascher, noting that today she hears from classmates interested in annuities. “I’m not enormously wealthy but I do have an investment portfolio and this is part of it.”

Ascher also mentioned her husband’s encouragement. “My giving is in no small part due to his support of me and of the idea of Mount Holyoke.”

It also serves her philanthropic goals. “Public service for women is near and dear to my heart,” she said, noting that the remainder of one of her annuities will go to the MHC Semester in D.C. after her death. “It just made me feel so good to be able to do that. Mount Holyoke will be part of my life forever.”